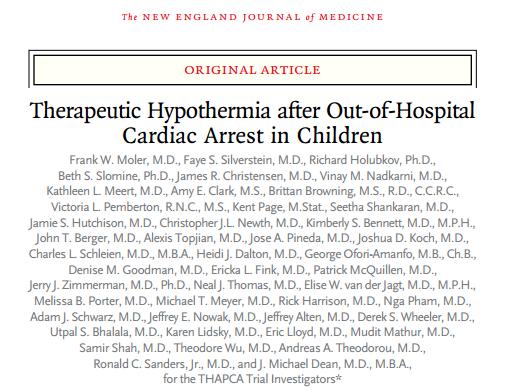 Where can I find this paper?

What is this paper about (what is the research question)?

Summary of the Paper

Objective: to determine whether therapeutic hypothermia after out-of-hospital cardiac arrest confers a benefit in children

Participants: 295 patients randomised between September 2009 – December 2012. 155 were randomised to hypothermia, 140 to normothermia.

Survivors at 12 months with VABS-II score >70

In comatose children who survive out-of-hospital cardiac arrest, therapeutic hypothermia, as compared with therapeutic normothermia, did not confer a significant benefit with respect to survival with good functional outcome at one year.

On the study design

The study was utilised multicentre collaboration to recruit a sample with 85% power to detect a 15-20% difference in the primary outcome between treatment groups. This was a pragmatic design; although the subjects and those providing care to the patients could not be blinded to the intervention, reasonable steps were taken to ensure that the investigators recording the primary outcome were a) independent from those delivering care and b) blinded to the arm of the study to which subjects had been randomised.

Unlike other studies, the normothermia in this case was also an active decision; the patients’ temperature was actively controlled according to the group to which they were randomised.

The authors tells us that other than the temperature targeted, care between the groups was identical although they later state that “all other aspects of care were determined by the clinical teams.” This does leave us to wonder what if and how knowledge of the treatment arm and expectation of its efficacy (or otherwise) might have influenced those treating clinicians.

What were the results and what does this mean?

There was no statistical difference in survival with a good neurological outcome at 12 months between the two groups. In the secondary outcomes, there was no difference in absolute survival between the groups, nor in the reduction in neurological performance score, however there was increased incidence of hypokalaemia and thrombocytopenia in the hypothermia group and increased requirement for renal replacement therapy in the normothermia group.

Results were analysed using intention to treat analysis, which includes subjects in the final analysis of the arm to which they were randomised irrespective of whether they dropped out of the study or received an alternative treatment in the end. This is a conservative approach which can help to ameliorate the effects of unpleasant side effects of treatments; there’s a nice explanation of intention to treat here. It helps give us a realistic expectation of the results we might see in clinical practice.

What can we take from this paper into clinical practice?

In this study the null hypothesis was no difference between the groups, this study doesn’t prove that hypothermia is harmful or not beneficial; there is simply insufficient evidence to reject the null hypothesis of no difference, based on this study. We should continue to follow local protocols in terms of cooling but this paper does give clinicians a little additional confidence in deviating from protocols if indicated.

This post at St Emlyns: JC: Getting Chilly Quickly 4. Doing It For The Kids